This blog post will focus on the Rack (Ruby) frameworks. Part one will provide a mini-overview, explore the benefits of using Rails and explain how we help you deploy a Rails stack with Cloud 66. In part two, I'll be taking a closer look at some of the additional Rack frameworks supported by Cloud 66 for Rails.'

Ruby on Rails (RoR) or Rails has been around since early 2003 and continues to maintain a lot of interest among the app development community. As we head into version 5, developers continue to embrace the ease, flexibility and pragmatism that comes with such a mature development framework.

Some of the reasons why developers choose RoR include:

And just simply because it's great for web technologies! The numbers speak for themselves. In his 2015 wrap-up report, Damir Svrtan reported the following Rails stats in his blog post:

But it's not all perfect, and there are definitely some challenges worth considering:

The reality is, the Rails ecosystem is mature and growth is steady. There's clear evidence that Rails developers actively use the framework, and there really are very few barriers to adoption that can't be easily resolved, especially when teamed with a build and deploy service like Cloud 66.

Easy to use through your choice of CLI or Web UI, Cloud 66 takes away the pain of configuration, monitoring or writing your own builds.

The service allows you to focus on development rather than maintenance, by offering a number of powerful, automated features including managed or unmanaged backups and replications, firewall management, load balancing, scaling, monitoring, failover groups, team access control and much more.

Additional features like LiveLogs were originally created to support Docker stack, but they are transparent and can also be used for Rails stacks.

Cloud 66 gives you the option to deploy your stack on any cloud provider or on your own server, integrating your stack with some of the most popular database technologies out there, including: MySQL, PostgreSQL, Redis and ElasticSearch.

How to build and deploy Cloud 66 for Rails

There are a few quick and easy steps to building and deploying Cloud 66 for Rails, which include a build and deploy process:

To build the stack, you'll need to have 3 main components in place before getting started:

No. 2: A Git repository with your application code
No. 3: Any cloud provider or your own server

No. 1: Cloud 66 analyzes your application code.
No. 2: You verify the configuration and define the deployment properties to fire up the stack.
No. 3: Cloud 66 provisions the server for you and will notify you when your stack is ready to deploy.

What does it look in practice?

There's no better way to see how Cloud 66 for Rails works in action, than by watching a short demo video. In this video tutorial, watch the steps covered by our resident developer evangelist Daniel van Gils as he takes you through how to deploy your very first Rails Stack with Cloud 66: 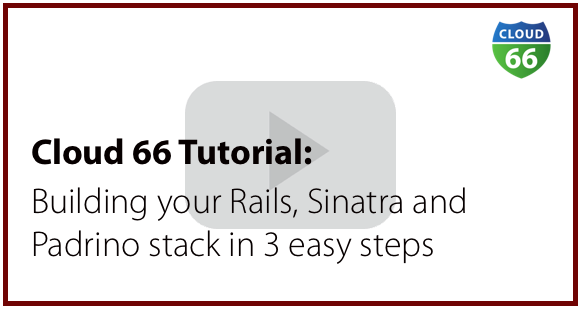 To get a sense for how other customers have been using Cloud 66 for Rails, check out some of our customer cases studies to learn more about how to get the most out of the service:

Support for Rack based frameworks

Cloud 66 has a long history of association with the Rails community; you've played an important role in helping evolve our company, and we're proud to be a part of that. We have an ongoing commitment to support our Rails product, and are pleased to announce newly added support for additional Ruby/Rack frameworks. To find out more read Part II: ‘Cloud 66 for Rails': exploring new Rack frameworks.