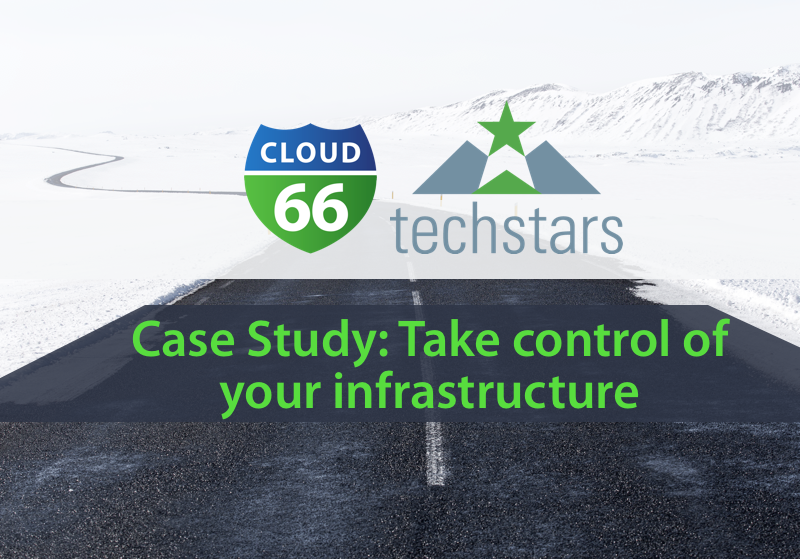 In recent years, we’ve experienced a business startup boom, especially in the tech world. Without a doubt, accelerator models like Techstars have transformed the startup ecosystem. By providing assistance to entrepreneurs through access to a global network, they’ve contributed hugely to the growth of countless companies.

As Techstars alumni ourselves, we’re excited to present a case study on how they’ve been using Cloud 66 for their own application management and deployment.

Techstars is a global ecosystem that empowers entrepreneurs to bring new technologies to market wherever they choose to build their business. One of the most popular accelerator programs globally, its international umbrella covers 22 accelerators, based in 16 cities around the world.

Techstars is renown for having an immaculate success rate; from the 799 companies that have come through their program, 90% are either active or have been acquired. This is achieved by providing easy access to the wide community of leaders, founders, mentors, investors and corporate partners, which allows companies to accelerate fast.

In 2014 Cloud 66 joined the Techstars Austin program and we’re proud to take our place alongside other Techstars alumni including DigitalOcean, SendGrid, SpoonUniversity, ApplicationsExperts, Brewbot, and many other.

I recently spoke with Jed Christiansen, Director of Technology and Dan Andrews, Software Developer at Techstars, to find out more about how we’ve been supporting their application infrastructure needs.

Hi guys, can you give us an overview of what the Techstars infrastructure set up looks like?

Currently, the Techstars infrastructure build consists of three main sections. First, there’s Techstars Connect, which is our networking application that includes over 3000 members. Then there’s our primary website Techstars.com, which received thousands of hits on any day of the week and lastly we have other additional infrastructure services powering smaller sites like our Demo Day application. All of these parts are connected by a core Techstars API.

What did the process of moving your infrastructure to Cloud 66 involve?

Four years ago we started with a very simple Rails app (our social networking app) that I was managing. We then had the need to use and display the data from this app in other places, like Techstars.com and later our smaller apps, so we built an API on Heroku to share the data. At that time, it was the most effective solution as it fit within our budget and allowed us to leverage a lot of adds-on made possible by Heroku including; hosted database services (with compose.io), monitoring, New Relic and more.

However over time, the cost of using Heroku started to increase, as we began to do more with our data. We began to notice performance issues, requiring us to increase the numbers of dynos we were using. We also had issues whenever we needed to update 3rd party services we were using via Heroku. For example, if we detected a bug in the system it created a lot of work for us to track it back to source. Because we didn’t have admin rights to the database, each time we had the smallest problem, we had to contact customer service as we couldn’t access our own database to fix the problem. This wasn’t ideal and together with Jed, we started looking for other solutions that could reduce cost and offer us more control.

Is this when you decided to migrate to Cloud 66?

Yes it was. Initially we considered building our own infrastructure, which was a popular option among devs before the Heroku era. This would minimise our costs and give us the control we were looking for. On the downside, I would have to become a SysAdmin in order to be able to maintain our own infrastructure, which as a developer was not ideal for me or for our small team.

Then I had an opportunity to hear Khash and Vic talk about Cloud 66 at the Techstars Demo Day.
I was impressed, thinking this gave us the convenience I had with Heroku, with a simple enough interface that would allow me to easily spin more servers. It works natively with Ruby on Rails, and would offer much more control, which is exactly what we were looking for. With us being such a small team, it made a lot of sense. So we decided to move our infrastructure to Cloud 66.

How was the migration to Cloud 66? Was the move complicated?

Not at all. We moved our infrastructure to Cloud 66 in stages. The Techstars Connect app was the first app we migrated. We started by moving our database that was hosted with compose.io and Heroku, to spin it up on Cloud 66 with MongoDB. Then, we migrated the Connect application itself. The whole process cost us less than an hour of downtime, which gave us the confidence to move the rest of our infrastructure.

Next, we moved the critical part of our infrastructure (our API), which also went very smoothly. As I was able to map everything that I was doing on Heroku (all the night jobs, environment configuration, keeping my SSL, etc…), I could find all the features that I was using at Heroku on Cloud 66 and more. I felt that I didn’t need to learn a new system, and it all came very intuitively.

How are you using the Cloud 66 service?

We use Cloud 66 for Rails for our applications. And as Cloud 66 can run on any cloud provider or server, it allowed us to move our infrastructure to DigitalOcean (another Techstars company). We wanted to support the startups coming through our program, and thanks to Cloud 66 we were able to do this.

Since then, our team has grown, and we now have 6 developers - 3 of them are already using the Cloud 66 platform. It’s very easy to add members of the team and with Team Access Control, it’s easy to monitor how other users are leveraging the platform for their projects. The solid integration you have with Github allows our developers to easily create new projects, apply changes and manage updates seamlessly. The rest of the team will be moved to Cloud 66 in the upcoming months.

What are some of the benefits you’ve achieved following the migration to Cloud 66?

I would describe Cloud 66 as ‘a silver bullet for helping scale.’ It helped us reduce our monthly infrastructure cost from $500 to less than $200 a month. We were able to gain control of our infrastructure. Now we can with ease pull the information from the database and share with other apps and access it easy if we want to make any changes or simply debug.

It’s a very intuitive interface, and the dashboard functionality gives me a high-level view into all my different stacks. You can also drill-down further by choosing a particular stack, which gives you more detailed views into my database and caching servers. I can always see the health status of my stack and I like having the option to setup a list of notifications alerts based on our workflow.

Additionally, we’ve really benefited from the load balancing functionality offered within Cloud 66, allowing us to offer a better customer experience. This is something that was missing at Heroku, which caused us a lot of downtime.

Taking into account your experience with Cloud 66 - how can the service benefit other startups?

From the perspective of a startup - especially a tech startup, often founders are looking for convenience and a quick turnaround as you push-out more and more key functionality. Cost is big consideration, and based on our own experiences, the expense of using PaaS services like Heroku can add up very quickly, having an adverse effect on cashflow.

If these are key considerations for your business, then I would recommend evaluating innovative startups like Cloud 66 and DigitalOcean who offer a better alternative that’s easy to use and more affordable. In the two years since we’ve been using Cloud 66, there’s never been a day that we’ve regretted the move, which is a huge testament to the product.

Dan and Jed, we’re delighted to be part of the fantastic Techstars family and special thanks for finding time within your super busy schedules to chat about Techstars. As a reminder, if you’re one of the startups that went through the Techstars program, you can benefit from $1000 of free Cloud 66 credits for one year.