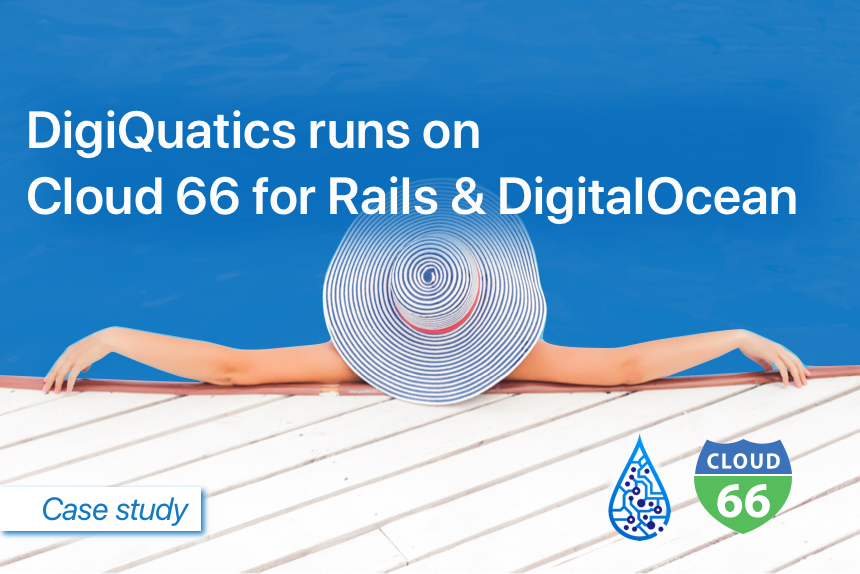 In today’s case study I would like to introduce DigiQuatics, a commercial swimming pool management app. It showcases DigiQuatics' infrastructure set-up with Cloud 66 for Rails and DigitalOcean.

DigiQuatics is an app for managing commercial swimming pools that was founded by Josh Duffy and Michael Pierce back in 2013.

About Josh Duffy and Michael Pierce.

Josh and Michael met as lifeguards at the age of 15. Both were energetic, inventive and were quickly promoted to management positions. Through their experience they identified the gap in the market, became self taught Ruby on Rails developers and created the industry’s most comprehensive management tool—DigiQuatics.

DigiQuatics is end-to-end swimming pool management software. It centralizes every aspect of pool operations into one online tool and streamlines day-to-day tasks. It reduces operating costs, eliminates paperwork, automates operations, and manages staff scheduling and communications all in one place.

How does it work?

There are 3 simple steps to get started.

Start by creating a DigiQuatics account on any device. Next, create employee profiles, add staff responsibilities, add the pool facilities and select the way you would like to manage them. Lastly, get to work and allow DigiQuatics app to take care of updates, reports, time cards, staff scheduling and more.

Who is using it?

DigiQuatics is present in 38 US States, Canada, Moscow and the Middle East.

How can I join?

You can sign up for 30 days free trial, or contact Josh’s team directly team@digiquatics.com to get the quote.

To find out more about the DigiQuatics I got in touch with the owner - Josh Duffy. Josh can you tell us more about DigiQuatics and your experience with Cloud 66? 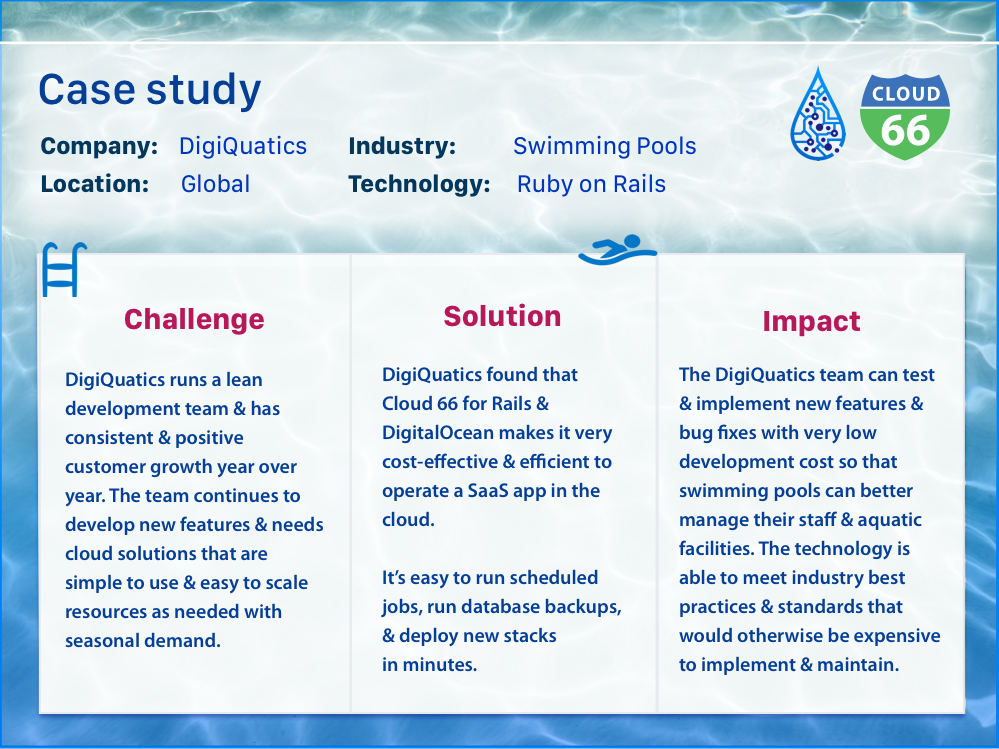 From idea to successful management app.

As lifeguards and managers at swimming pools we saw that there wasn’t one app that did everything in a swimming pool operation. Most pools were very much paper-based and couldn’t leverage any data or get helpful information in real time. The founding team worked on a couple projects, but ultimately learned Ruby on Rails and AngularJS from tutorials online. Heroku was the default resource to deploy your first app to in the cloud, so we just used that, but the cost grew out of control once the app started to scale.

We tried using DigitalOcean with Capistrano, but felt like we didn’t really understand what was going on and the whole system felt “fragile.” Cloud 66 gave us peace of mind since we weren’t dev ops engineers and couldn’t afford to have one on the team.

What business problems were you trying to solve by choosing Cloud 66?

We originally looked for and moved to Cloud 66 because Heroku was becoming an $1800 / month cost and was getting out of control. Other cloud servers were a pain to deploy compared to Heroku, so we were looking for a Heroku-simple alternative at a fraction of the cost.

Migrating to Cloud 66 took less than a day to get up and running. The longest part was backing up and moving our database over to a DigitalOcean server. From multiple standpoints, moving to Cloud 66 + DigitalOcean has saved DigiQuatics thousands of dollars since the transition that we can better allocate to sales and marketing efforts.

DigiQuatics runs on Ruby on Rails with React JS, Angular JS and a MySQL database. We have a rails server, worker server, database server, and Redis server on DigitalOcean along with duplicates for a staging environment.

In 2020, we really plan to dial in performance improvements and make the app scalable for a much longer future of growth on similar size cloud resources. We also plan to make the app more user-friendly on mobile devices and improve the user experience with fewer / more relevant notifications to users.

It is awesome to work with Josh and the DigiQuatics team. Thank you Josh, for finding the time to chat with us about your developer journey, DigiQuatics infrastructure and your experience with Cloud 66 for Rails. We love to discover all the unique ways in which our customers are using Cloud 66 products!