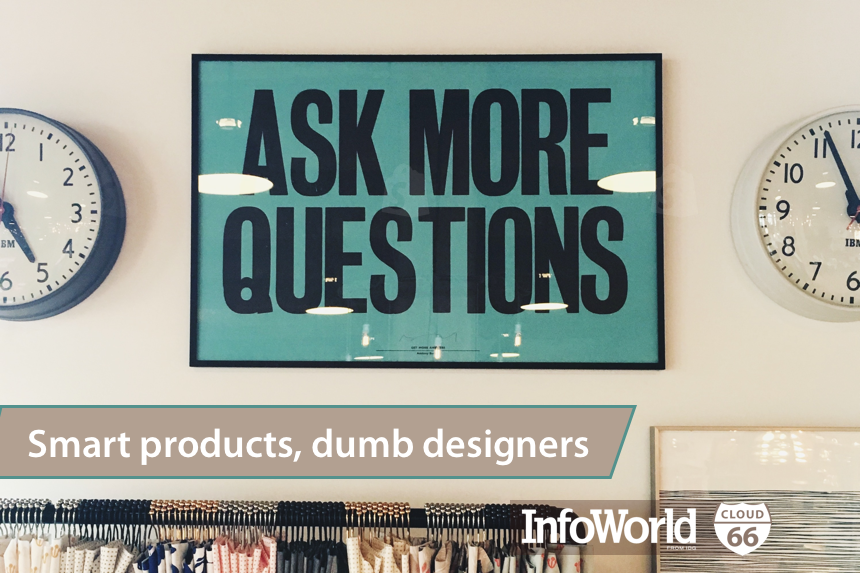 While focusing on minimalism and "doing less" is a great way to make users love your product, being your product’s primary and daily user is a sure way to reduce customer churn.

I own a Smart car. It is Smart only in name, especially the "Multimedia System" that comes with it.

Every morning when I get into my car and start it, the multimedia system comes on and plays the radio. I don't listen to radio much but my smart car probably thinks it is good for my mental stimulation and cultural cohesion. I disagree with the car and want to listen to Spotify on my iPhone connected via Bluetooth. So I wait for the multimedia system to connect to my phone. This takes about 20 to 30 seconds.

Once it is connected, I go to the Menu, select Media, then Bluetooth. My car shows each page with a smooth visual transition as if choreographed by a movie director: each page fades out and the next one slides in from behind while fading in with vivid orange colors. Beautiful. It takes 3 seconds for each page to run this transition.

So now 40 seconds later I have gone through 3 pages of menus to get to Bluetooth. Once I press Bluetooth, the multimedia system starts playing the same song from my iTunes: a song that begins with letter A. Every time with no exceptions. I never listen to iTunes (or Apple Music or whatever it's called now). I listen to Spotify, and I had just listened to Spotify at home before I left to get into my car, so I expect that to carry on. But my smart car thinks Apple Music is better for me.

So we disagree again, I stop the first song on my phone, open Spotify and play my favorite playlist. Well, not so fast.

Since connecting to my phone, my multimedia system decided it wants to download all my phone contacts first, and since it has the CPU power of a calculator in the '80s, this takes a couple of minutes at least, during which everything on the multimedia system slows down to grind. This is slowed down even further by interjecting alerts that it has "Downloaded contacts" or "198 traffic incidents received". Why do I need to have my contacts on my car and why would I want to know that there are 198 traffic incidents in town that morning is beyond me, but my multimedia system thinks it's a useful piece of information. Perhaps I'm supposed to spot a trend in the number of traffic incidents in the city. I wait patiently for technology to be helpful in its own way.

So now, about 2 minutes after getting into my car, I am ready to listen to my favorite music and drive off to work. This is my daily dance with a bad product.

My car's multimedia system also uses a car icon instead of an arrow in the GPS navigation. Better still, it allows me to change the color of this car icon. I have a choice of about 42 different icons of Smart cars with different models and colors to choose from. I never change that, of course, but my children love that feature. The first thing they do when they are in the car is to choose the color of the car icon for the day. I don't mind the feature. Its uselessness and its appeal to 10 year olds who clearly are not the primary users of a driving navigation system is puzzling, but hey, what's the harm?

As someone responsible for a product, I'm intrigued by my car's multimedia system. What possessed the design team to decided they need to have 42 cars to choose from in a GPS navigation system when almost every mobile on the planet uses an arrow and is completely fine? Or why is downloading all my phone contacts to the car is needed (for the voice commands I guess, another useless feature when you have a smartphone) and why is this something that should happen right after connection, which is when most people need to interact with the UI before driving?

Do they actually ever drive their own cars or they just love listening to radio every morning? Because there is no other way not to notice the issue with this daily dance of technology.

As a customer and user of this multimedia system I am not annoyed by the complexity of the UI as much as the daily inconvenience I have to face every day, however minor they might be. Inconveniences like this add up to frustration while configurability of a GPS navigation icon is just silly.

Many product startups know the value of minimalism and "doing less." They focus on doing fewer things and doing them well. Asking for a new feature from many of them is most likely going to get a "no" answer, and for all the right reasons. I, however, think that customer churn is not caused by silly or unwanted features. Even edge-case missing features are not a big factor in customer churn: it is these daily inconveniences that contribute to churn the most.

As a product designer, you need to be able to see your product with a fresh pair of eyes and see if often and regularly. You need to be the primary and first user of your own product and notice how you work around inconveniences caused by bad design or poor quality in your product without getting used to or blind to it.

If those who designed my car multimedia system used it every day themselves, I wasn't going to look for CarPlay in my next car. I not going to buy a car because it's called Smart. I would buy a car called Dumb as long as its designers are smart.

This article first appeared on Khash's InfoWorld Blog on 13 December 2016.