The aim of this blog post is to measure two processes: the speed of VM creation and the time of accessing the SSH key among cloud vendors at Cloud 66 (AWS, DigitalOcean, Linode, Vexxhost, Google Cloud, Rackspace and Microsoft Azure). The information is based on our internal data, collected since January 2014.

Which cloud vendor creates the VM and SSH access in the quickest time?

The rest of the cloud vendors had slower results, for example, DigitalOcean takes 1 minute 29 seconds on average, Rackspace 2 minutes and 8 seconds and Microsoft Azure has the lowest score of 2 minutes and 18 seconds to fire up a box and let you in with SSH. 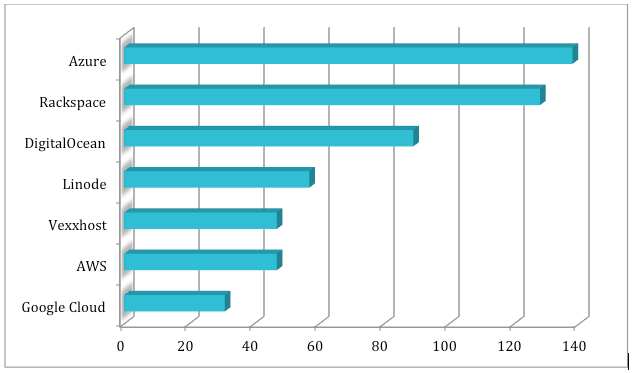 The data shows that Google Cloud is more than 4 times faster than Microsoft Azure or Rackspace in completing both processes.

What is quicker? Creation of VM or SSH access?

We evaluated the speed of VM creation and the time it took for the first SSH access to the server separately for each cloud vendor.

First let’s look at the speed of the VM creation. 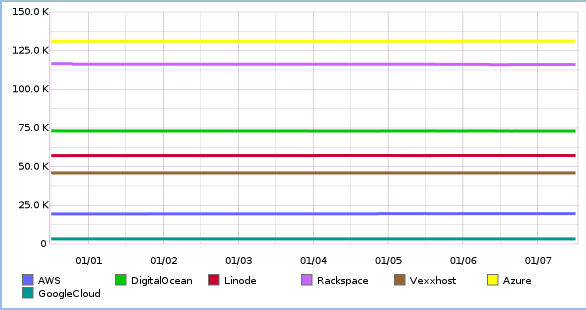 If we look at the cloud vendors and compare their total speed result (the time of creating VM and granting the first SSH access) with the speed results of the VM creation alone, we can notice a strong positive correlation. Google Cloud is the fastest and Microsoft Azure is the slowest.

Now let's check the time it takes for the first SSH access. 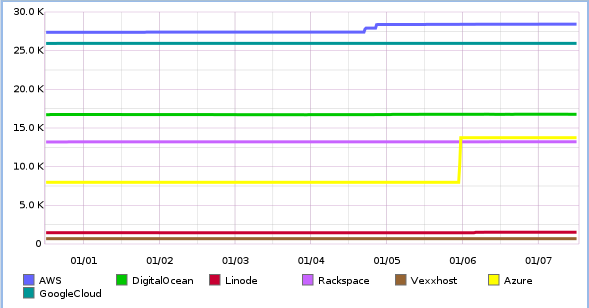 Although Google Cloud and AWS are the speed leaders in the VM creation they are the slowest in granting SSH access for the first time out of all cloud vendors. However, this does not influence the end result.

Does the region matter?

Cloud vendors at Cloud 66 cover different regions in the word and it is difficult to compare them directly. Therefore, we will review the following regions: Europe, Asia and Oceania and USA.

From all of the Google Cloud regions, the West Europe region is the fastest, completing the VM creation and SSH access in 23 seconds. Google West Europe is closely followed by the AWS Europe with 42 second.

Linode is the fastest cloud vendor in the London region (1 minute and 14 seconds). Other alternatives are DigitalOcean and Rackspace which take over 2 minutes.

DigitalOcean is present in Amsterdam region and the speed of the VM creation and SSH access can take from 1 minute 7 second up to 2 minutes and 10 seconds.

Out of all Google Cloud regions, the Asian region has the slowest speed results (38 seconds). Nevertheless, Google Cloud is still a leader in the Asia region.

The other cloud vendors present in Asia market are Linode, which covers Tokyo region (1 minute and 43 seconds) and DigitalOcean in Singapore region (1 minute and 31 seconds). Although the SSH access times might be affected by the distance between our servers and the Tokyo data center, the VM creation process is not.

In the USA Central region, Google Cloud is able to create VM and open SSH access from 25 to 31 seconds whereas Microsoft Azure is
nearly 5 times slower.

AWS covers the US East and West regions and completes both processes from 38 seconds to 47 seconds.

The content of this blog post is base on the Cloud 66 internal data collection. Please feel free to contact us if you have any questions or any additional data which could be added to this blog post.