Docker in production from A to Z

If you have tried using Linux containers (like Docker) in production, you are aware of the difficulties surrounding image building, orchestration of containers, logging and monitoring them.

Cloud 66 simplifies Ops for developers by building, configuring and managing your servers on any cloud. Our Docker support provides a complete toolset for rolling out containers to production on your own infrastructure.

Today we are excited to share with you our Docker toolset for production. A complete product suite to make it easy to benefit from containers in a production environment.

But first let’s have a look at some of the hurdles of getting containers into production:

Using containers for development is easy; not so much in production.

Docker (and Linux containers in general) can improve many aspects of software development. They bring:

However running a container-based stack in production is not easy. Here is what you need:

Cloud 66 provides all of these to you in one simple to use tool including web UI, command line and API.

Cloud 66 support for Docker, includes a complete set of tools you need to run your applications in containers and in production. Here is a summary: 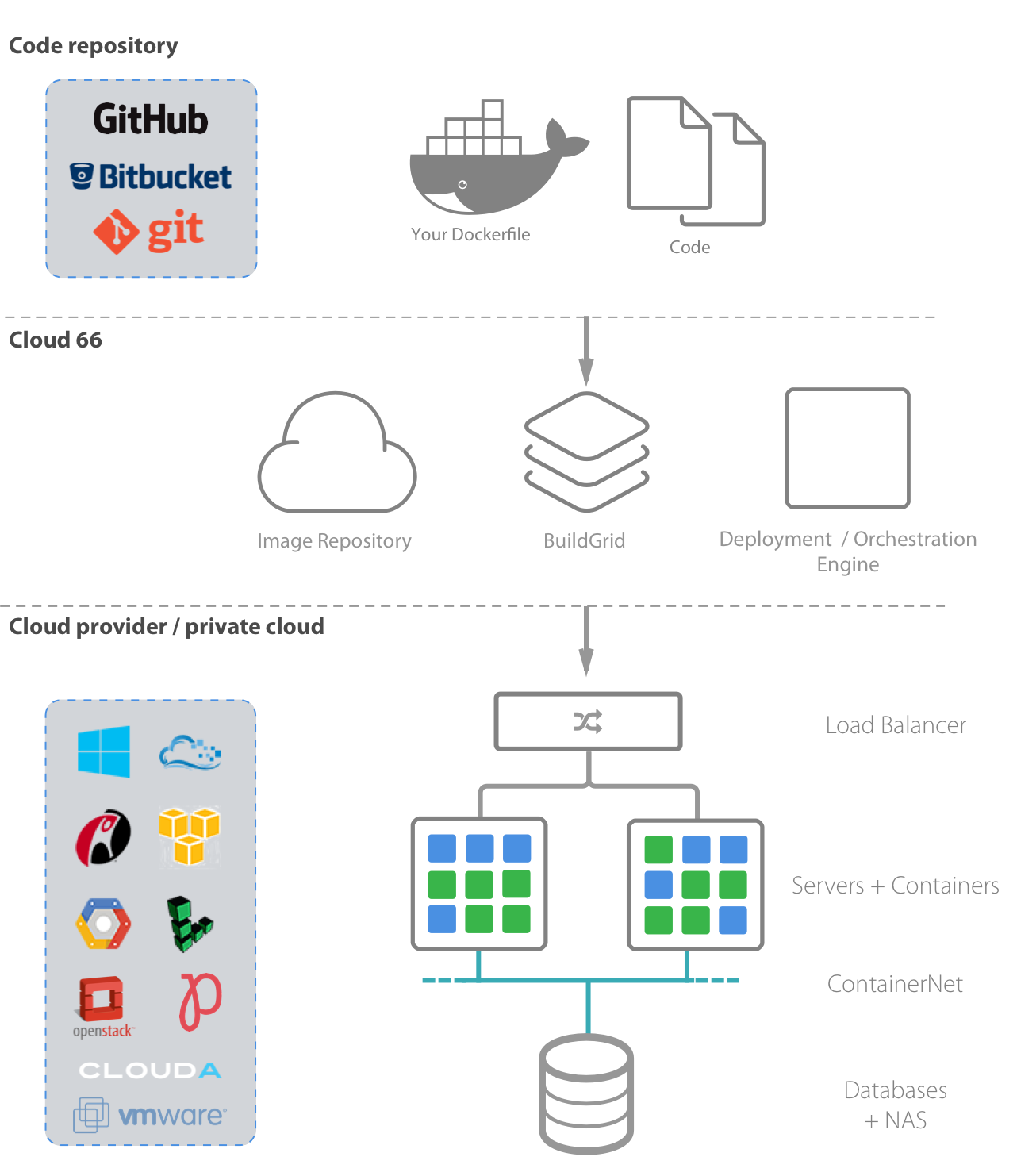 Details about some of these components are below. For those interested in technical details, please feel free to visit our documentation.

From Code to Docker images with BuildGrid

BuildGrid is a hosted Docker image building service that fetches your code from any git repository and uses your own Dockerfile to build a Docker image.

The first step in using containers in production is introducing them into your development process.

BuildGrid can be configured to rebuild new images every time code is committed into the repository, to achieve full continuous delivery.

BuildGrid comes with a private Docker image repository and a web UI which links code commits to an image, successful and failed builds and build logs. Images can be pulled from this repository to your development workstation for debugging and testing purposes.

ContainerNet is a private and secure network connecting all of your containers and hosts in your cluster. It comes with built-in DHCP and DNS (ElasticDNS) services that are aware of your entire stack and deployments and reflect any changes in any of those across your stack automatically.

ContainerNet is backed by Weave which brings a native-like network interface to the containers requiring no code changes, is highly performant and secure and scales very well.

Note: ElasticDNS is the name of our DNS service which is available from all containers and is fully integrated with BuildGrid and our deployment engine. 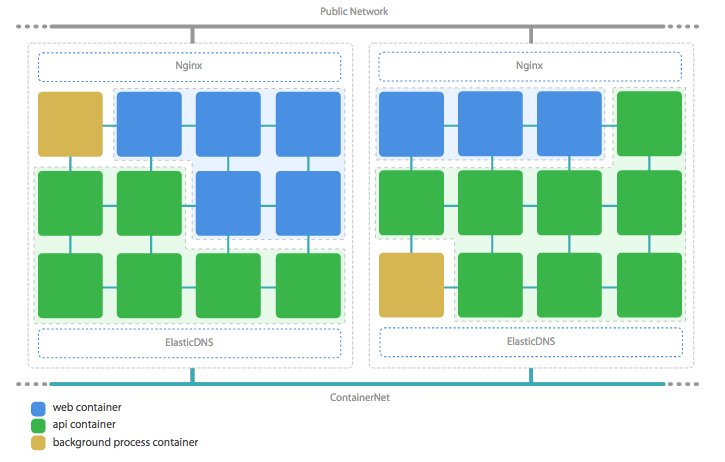 Every service deployment updates the DNS servers across the cluster to have the correct containers for each container and host.

ElasticDNS is capable of returning the best candidate for each DNS query: round robin, closest or same version as the caller.

This is the simplest way to use Service Discovery without forcing any code change on your side.

Logs from all containers are collected into specific but customisable folders on each host and can be configured to be sent to hosted log providers like Logentries or your own Syslog. To take it further you can use Docker’s stats API for better logging and stats gathering with Logentries’ recent full integration.

All stacks deployed with Cloud 66 also benefit from the following:

The Cloud 66 platform manages thousands of servers across 76 data centres in 8 cloud providers for hundreds of small and large companies. Thousands of developers rely on Cloud 66 every day to build, deploy and manage their applications on their servers.

We’d love to help your engineering team be more productive and your company move faster by making use of Docker in production easier!

Starting with Docker on Cloud 66 is very easy. Try it for free!