Did I just see Google Cloud go back in time? 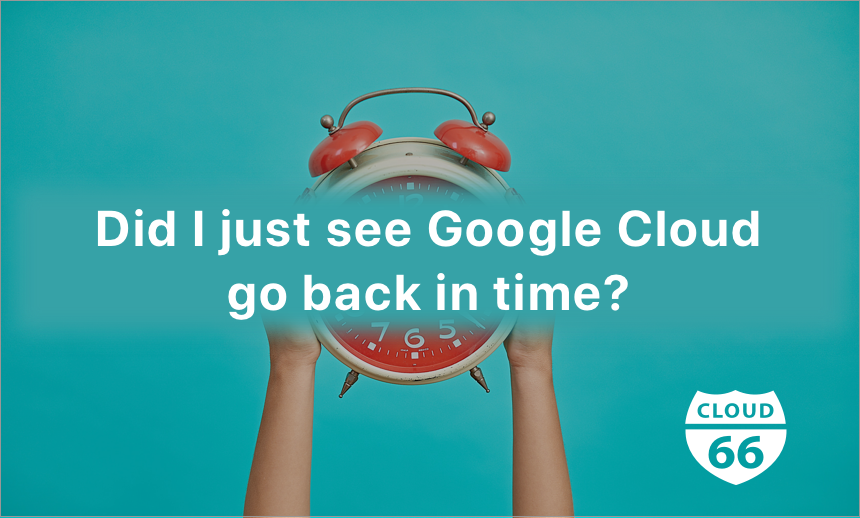 Since its beginnings, Google cloud has had an identity crisis. They entered the market after AWS and Microsoft and tried to find a unique angle that makes them different from the other two.

BigTable was their first attempt. When you think about it, they've been crunching large quantities of data for years and have built a truly impressive technology base to make that possible. Google's unique ability to make sense of huge amounts of raw data was what made their cloud different. This, however, didn't sell well to the masses. Smart meters and some other niche use cases aside, not everyone needs or has that kind of data, so Google moved on to the next thing: Compute Edge.

Over the years, Google's made a huge infrastructure footprint around the world. From data centers around the globe to abundant fiber capacity connecting them is what makes Google very different from other providers that have to buy such infrastructure from third parties. More than that, Google has servers in everyone else's data centers as well. This makes their cloud attractive to those who need computing power very close to the point of consumption. Remember how much noise Google made when they signed up Spotify as their cloud customer? For Spotify, this makes perfect sense: being close to the edge and enjoying unrivaled connectivity bandwidth gives them an edge over competitors. But, this also wasn't something everyone wanted. Not everyone is as crazy as Spotify about being close to their end users. So, Google moved on again to the next thing, in their never-ending quest for their identity. This time it was machine learning.

Comparing Google's ML technology with Apple or even Amazon's some years ago was not a competition. Google had, and still does have the best ML technology hands down. But AI and ML are not common use cases of the cloud for the masses. To look at this from a different angle, AWS built its cloud business by selling basic building blocks of storage (S3) and compute (EC2) first. A plethora of other products followed later, and still to this day, it's not a crazy idea to think AWS's bread and butter is EC2 and S3: the humble basic simple building blocks of IT infrastructure.

Microsoft on the other hand, started Azure as a PaaS: a full platform that needs no involvement of any sort to run applications. It turned out, no one wanted that, so Microsoft did what Microsoft does best: they listened to their customers, swallowed their pride, switched gears and started selling the basics: The Windows company, started selling Linux compute and basic block storage, just like Amazon did but also leveraging their deep network of enterprise customers. In the meantime, Google was still trying to find their unique selling point in big data, compute edge, ML and AppEngine, their own PaaS. This search for identity ended when Diane Green took the helm at Google cloud and tried to define what Google cloud is on 2 base pillars.

The first pillar was the containers. Google has been running everything in containers for years before almost everyone else. They built an impressive technology base to run large-scale container-based infrastructure and stumbled on a golden opportunity, almost by accident, when Docker Inc popularised the idea of containers but failed to build a business around it. Google took the opportunity and rolled out Kubernetes and used their prowess to make it the standard way for running containers. Again, from a technology point of view, Kubernetes is an engineering marvel. But like many other systems of similar complexity, it's difficult to operate, so Google Cloud could be the best place to run Kubernetes; or at least that was the theory for the first pillar of Google cloud's identity: "Containers are the next thing in the future of infrastructure, we know them better than anyone else, you do the math. Hey, we're going to even call our own re:Invent, Google Next! Get it?".
Unlike the previous UPSs, containers could be suitable for a majority of workloads and companies. This meant they finally had something different in a market of infrastructure "staple ingredients".

The second pillar of Google Cloud's identity was developers. AWS was the most complete cloud, selling to enterprise and nurturing a partnership platform is in Microsoft's DNA but Google Cloud was the developers' cloud in almost all aspects: from the marketing content to their documentation, their approach to open source and everything in between. It didn't hurt that containers need a big buy-in from developers as well. The two pillars were holding up the same ceiling!

The thing is, Google has always had an issue in selling to the enterprise. Let's face it, no one likes a challenger cloud coming to their offices, telling them they are stupid and should listen to them about how they should do their job. The reality is, Google Cloud people really want you to know they are the most clever people in any room. It doesn't matter that they probably are the most clever people in the room. You just can't sell to people by making them feel stupid. One customer-base that appreciates engineering beauty is, however, developers. Google technology captures developers minds and that means they have been able to build the best developer-friendly cloud around.

So, Google finally found their true unique selling points: containers and developers; or at least this is how I thought when I left the last Google Next conference. Since then Diane has left and this year's Next was a different story. This year, Google was back being an AWS wannabe and trying to push every ounce of their marketing to our faces by telling us how they love partners and how they love open source and how they are not going to mess with the open source business like Amazon.

The problem is, even if all of that is true, it's again back to taking a reactionary approach to AWS. AWS screws MongoDB and other open source businesses? We don't! AWS has built a moat with partners and integrators? We want to do that too! Azure is full of salespeople with deep partner knowledge and embedded connections in anyone who's ever used Windows or the Office? We're going relabel GSuite as GCP products too!

Don't get me wrong. Selling to the enterprise needs those connections and partnerships, but those are not going to give Google anything unique to carve out as their own niche in the market and grow it. They even brought in GSuite and Map under the Google Cloud umbrella so they can showcase big names as Google Cloud customers, while in reality most of those are GSuite customers, not Google Cloud Compute, Kubernetes or BigTable customers.

Overall, I have downgraded my hopes for Google Cloud greatly this year. For a long time, I have been a big fan of GCP and their ability to build great technology and amazing communities of developers around it. This year's Next was like a poor man's re:Invent with hip colors, a lot of marketing hot air and nothing else to show why anyone should move their workload from AWS or Azure to GCP.

Is it just a blip in their quest to define themselves or are we going to see yet another shift in GCP's attention?